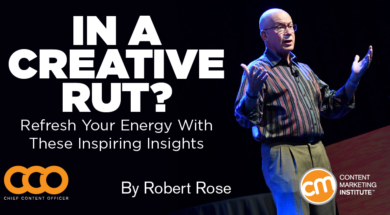 Editor’s note: The following article was originally published in the all-digital debut issue of Chief Content Officer magazine. This new version enables us to share audio, video, and more. Check out the interview below. Or listen to or watch the 5-minute interview in the magazine. (Subscription info at end of this post.)

Dewitt Jones may not be a marketer, but he’s certainly a content master. At Content Marketing World 2018, he received a standing ovation for his inspirational and moving keynote talk.

Read on for his advice, then watch the video to see his advice in action.

CCO: You say that a key part of storytelling is looking at the ordinary and seeing the extraordinary. How do you do this?

Last night I started taking pictures of my coffee cup at the restaurant. And the next thing I knew, there was a little light coming in that made this incredible pattern in the top of the coffee. I could’ve just drunk my coffee and never even knew that I had a cup. But I was in it. I was looking for the extraordinary in the ordinary.

And the thing that is really fascinating is that usually the difference between a good frame and a great frame is that much. (He holds his forefinger and thumb an inch apart.) You’re taking a picture of somebody’s face, they turn, the eye moves a little bit, the mouth turns up and you’ve got it. It’s just being open and very sensitive to what’s around and believing that that next right answer’s out there.

CCO: There’s a related concept I find helpful in what I call the quiet work: You’re not trying to get to something that would normally stand out in your world. You’re just seeding the well.

DJ: Yeah, that’s what I mean. You’re back in it, you’re not saying, “Oh, I’m blocked.” But you’re working, and you’re moving, and then you have to say, “But I’m not going to stay mediocre, I’m going to stay open to it.” The hard part is when there are five clients standing behind you. If I’m just off working by myself, that’s a lot easier. I might pick up my iPhone and go shoot for an hour of just nonsense that would get me out of it. It’s harder when there are a bunch of people standing next to you. And they expect results. Now!

CCO: You started your career as a storyteller in photographs and films. You’ve written magazine columns, collaborated on books, and done a lot with multimedia content. When you’re creating, do you start with the medium or the story?

DJ: When I’m working professionally as a photographer, I don’t get that choice. You work for (National) Geographic; you’re going to shoot stills. You do something else; you may shoot multimedia. I go on stage to give a speech, I’m going to give a speech. So it’s chosen for me. If I’m creating in and of itself, or I’m just saying, “OK, I’m going to create something,” if I see something that moves with a beginning, middle, and an end, then it’s probably going to be video. It’s going to be film. If it’s a symbol, if it’s one symbol that I want, it’s going to be a still. It’s going to be something that people will have in their mind forever. If I can link that to a concept, then I’ve really got something because stills, even though they’re really cool, they’re open ended. And the words can come in and just give you the thing that gels and makes it into a symbol.

CCO: One of my screenwriting coaches used to say, “However the idea ultimately expresses itself is how the idea should probably stay.” He wasn’t a fan of novels becoming movies or television shows becoming novels. Do you find that the expression can evolve or can change?

DJ: Sometimes, when you envision it, that’s how it stays. But I’ll come back to a still that I didn’t take for a specific reason, I just took it because it moved me, and find that that’s the perfect symbol if I match it up with words to do something, or it’s the perfect expression of a story or a metaphor that I’m trying to put out.

CCO: How do you work with an editor?

DJ: When you worked at the Geographic, you did work with an editor. And you usually met and talked with them and you worked closely with them, and they were really good at what they did. Now, (you can) look at it on your iPhone. But before, you’d send off film and you wouldn’t see it. So, he’s telling you if it’s OK. It’s great to have a second set of eyes if you trust that set of eyes.

In advertising, sometimes I would just be the guy who made the art director’s picture come alive. But when I was really in my element, it was the art director who knew how to move me a little bit, just push me that extra bit, because he hired me for my eyes. He knew that he wanted me to do my magic and then he’d just kind of steer me, and it was fantastic.

CCO: What advice do you have for those just starting to explore their abilities as photographers and aspiring storytellers?

DJ: Two things. First of all, we have the most incredible visual sketch pad ever. It’s called the iPhone, or the Android, it doesn’t matter. I’ll shoot 50 to a 100 shots a day just to keep my chops up. I’m just playing. I went for a walk yesterday before dinner and shot 50 to 60 photographs. Didn’t matter what they were of, just things that moved me. Just playing. I’ll sit on a plane and play with apps. They’re not going anywhere, they’re just for me to play.

Play is an incredible way to be creative. You’re just playing with it – no goal, no expectations, says @dewittjones. Click To Tweet

CCO: When you’re on assignment or just playing around, how do you find that hero image among the 50, 60, or even hundreds of pictures in the same setting?

DJ: I think the ones that are great just leap off the screen. You can go through a bunch of them and go, “No. No. No. No. No. No … Woah!” Now, you may get five “woahs” and then it gets a little harder. You get down to that, “Should the hand be here? Should the hand be there?” But the main setup, that’ll leap out at you. There’ll be one where the head just turned that far and you’ll go, “There it is, there it is!” So, I don’t find that as hard as I’d thought. It finds you. And that’s gotta be an emotional reaction.

David Harvey at the Geographic said, “Don’t shoot what it looks like, shoot what it feels like,” so that when somebody looks at it, they go, “Whoa,” you know, something happens.

Want to hear or see the full interview? Check out this month’s digital Chief Content Officer magazine. Not a subscriber to the magazine? Sign up today and receive content exclusive to magazine subscribers.

And want to be in the room for this year’s keynote speakers at Content Marketing World (including Mindy Kaling)? Register before May 31 for early-bird savings. And use code CMIBLOG100 to save another $100.

How to optimize paid search ads for phone calls

What defines high-quality links in 2019 and how to get them? Search Engine Watch