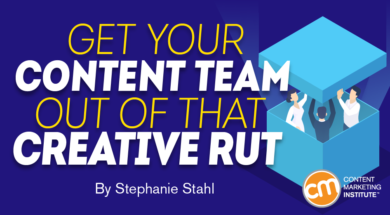 We know teams set out to create, distribute, and promote amazing content – content that matters, that’s fresh, innovative, and relevant. We also know these teams can get in a rut and become risk averse or, worse, stagnant. And that conundrum sets up leadership challenges that even the best managers and most effective executives might not be prepared to handle.

Todd Henry knows all about these potential team crises. He’s written books about them, including The Accidental Creative, Die Empty, Louder Than Words, and, his latest, Herding Tigers: Be the Leader That Creative People Need.

I recently talked to Todd about the challenges of leading a creative team and I share highlights of our talk here. If you’re heading to Content Marketing World 2019, make sure to catch his session for more advice on how your team can unleash its best work every day.

Causes (and solutions) for creative ruts

Whether you’re a content creator, editor, producer, graphic artist, or other content marketing professional, you’ve probably encountered the creative doldrums. Todd groups the common causes into seven “deadly sins” that cause the organizational stasis that leads to mediocre work. Among them:

Aimlessness doesn’t mean you don’t know what you’re doing. In this sense, aimlessness means a hollow feeling about your work, often because it’s “decoupled from any deeper sense of why you’re doing it.”

The antidote to aimlessness is to find what Todd calls “your productive passion.” Here’s how he explains it:

The word ‘passionate’ comes from the word ‘pate’ which means to suffer. When we think about passion, we talk about things we like. Instead, we should be talking about things we care so much about that we’re willing, if necessary, to suffer on behalf of it. We’re willing to push a little harder to overcome obstacles. We’re willing to stay a little later. Once you identify that for yourself … that’s a powerful motivator and driver.

It’s easy for boredom to sneak up because you always feel busy. You might even be accomplishing a lot. Boredom seeps in, though, when you stop asking important, strategic questions. As Todd explains:

Many busy successful professionals stop asking, but in order to produce brilliant work, we have to ask great questions. We have to be fiercely curious. That means we have to [ignore] that constantly distracting voice in our ear saying ‘you should go check your email right now. You should go check your Twitter feed right now.’ Especially for content marketers, this is a big issue. I’ll talk about some ways that you can stoke your curiosity and ask better questions to help you stay more mentally engaged with your work.

To produce brilliant work, we have to ask great questions. We have to be fiercely curious via @toddhenry. Click To Tweet

Part of the reason people stop asking questions, Todd says, is that it makes them accountable for finding the answer.

Push through boredom by daring to ask the hard questions and hold yourself (and your team) accountable for working on the answers. That’s easier said than done, of course, because of the next factor that holds us back.

Though people tend to think of fear as “some monster we have to slay,” Todd suggests it’s harder to push through the fear than most think. Here’s why.

“Fear is very crafty. Often our fears are the result of perceived consequences of failure. We tell ourselves stories about what’s going to happen to us if our copy isn’t good enough, if the book doesn’t sell, if the product doesn’t sell, if this project is rejected by a client.

“But we also tend to artificially escalate the consequences of failure. Instead of pushing ourselves and our teams to ‘just do it,’ we should practice parsing true risk from perceived risk. When you’re contemplating a potentially risky decision, ask your team “What are we afraid might happen if we do this?”

Let’s make it real. Put it in front of us so it doesn’t just cloud our thinking or stew in the back of our mind. Let’s talk about it as a team. Once you realize that even your worst fear isn’t really all that bad, it frees you to be creatively brave.

Realizing that your worst fear isn’t really all that bad frees you to be creatively brave. @toddhenry via @EditorStahl Click To Tweet

In Herding Tigers, Todd talks about how to be the kind of leader creative people need. Creative workers need two key things from their team leaders: stability and challenge.

Stability comes from leaders providing “clarity of expectation and process,” Todd says. Clear milestones are in place for a project. Leaders get buy-in from stakeholders and create boundaries around the project – budget, time, scope, etc. And while they may feel like constraints, Todd says it’s a mistake to position limits as inhibitors to creativity:

Orson Welles said, ‘The absence of limitation is the enemy of art.’ If you give people complete freedom, it’s not very helpful. If somebody just tells you to [write] whatever you want, that’s not helpful. If you have even just a little bit of direction, it gives you a starting point. It helps your creative juices flow.

Challenge is the second thing leaders must give their creative teams. Everybody needs to be pushed occasionally to do things that feel a bit beyond their grasp. If it seems a little bit risky, Todd says, that’s all the better.

Stability and challenge naturally co-exist in tension. When stability increases, challenges decrease. As challenges arise, stability plummets. He points to startups as an example of this phenomenon at work. Typically, early startups operate with few processes because they’re making it up as they go. “It feels invigorating,” Todd says, “but it’s also a recipe for burnout.”

What’s a creative team leader to do? Todd says the key is to identify the mix of stability and challenge each person on the team needs. Some people thrive on ambiguity and uncertainty, which indicates a high tolerance for challenge. Others need frequent touchpoints and feedback to give them the sense that they’re on course. It’s the leader or manager’s responsibility to figure out the balance of stability and challenge that each team member requires. “You can’t treat everyone the same,” he says. “You have to really lead people individually and strategically to get creative work.”

Finding the creative in every industry

Not everybody believes they can be creative with content, especially when the industries they work in seem less glamorous than others. They conflate creativity with art. But creativity can happen in any industry because creativity is really about problem-solving. As Todd says:

We think that because we’re not artists, we’re not creative. That’s not true. An engineer is remarkably creative because an engineer solves problems all day long. Same with entrepreneurs. They find a white space in a market, and they create a solution to fill that white space. Every single day people who solve problems are being creative.

People in sales, business development, product development, customer service, and many other departments solve problems. And they need to develop practices, habits, and disciplines to facilitate that creativity.

One way to facilitate creative problem-solving is to work at empathy, which Todd calls a killer application. And, yes, empathy does take work:

We tend to think empathy is innate, it’s ingrained. It’s simply not. We have to choose to be empathetic. That means that in the moment, we have to pause. We have to reflect on the time we’ve been in the other person’s situation. We have to imagine or remember how it felt for us and remember what we needed at that point.”

Brands that do this well resonate deeply with their audiences. Those that don’t, he says, come across as wannabes. If we can write “from the inside out rather than from the outside in, we can’t help but create more resonant copy and a more resonant brand.”