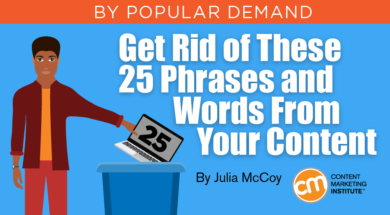 Editor’s note: Useless words abound in text. That’s why Julia updated this article originally published in 2017, adding more words that you should avoid.

In online writing land, clarity is your best friend. The clearest prose is the type anyone can understand, learn from, and enjoy.

Stuffing your sentences and paragraphs with filler and fluff – words and phrases that add zero meaning to what you’re trying to say – is the opposite of clear writing.

It bores your readers.

It complicates your ideas.

It waters down your message and makes it less impactful.

Online content needs a lighter touch to succeed. Internet users are notorious for their short attention spans, and most of them aren’t reading in depth but scanning for meaning.

Cutting filler words that bloat your online writing is how you hone it to a sharp point. It’s how you ratchet up your words’ value for readers (because clearer content is easier to understand – period).

This list of words and phrases includes the common culprits. When/if you use them, check yourself and ask, “What is this word/phrase adding to what I’m trying to say?”

If the answer is “nothing,” cut it.

With that in mind, let’s get to the list:

This is one of the flabbiest phrases I see in writing. People use it, but not one sentence stops working if “in order to” is deleted (or replaced with “to,” which has the same meaning). This one small change makes the statement clearer.

“Really” clogs your content. Think of it this way: If you’re saying something is “really” tall, you’re missing the mark. How tall is it? Quantify it. If something has “really” improved, readers want to know how much. Qualify it.

While the purpose of “really” is to exaggerate something, readers respond better to text that gets more granular in its measurements. With that in mind, swap this vague term for a more accurate descriptor. If you can’t be more descriptive, delete “really.”

HANDPICKED RELATED CONTENT: How to Make Your Writing More Powerful

“Believe” and “think” imply something is opinion or indicate doubt in its validity. Both are bad for your copywriting. People are more interested in the facts and hard information than they are in vague thoughts. Even if you’re writing an opinion piece, readers should understand that based on the context, making “I think” a needless phrase.

These two words also pop up when a writer isn’t sure about the statistic or fact, and that is dangerous. Again, readers want information, and merely “thinking” a statistic is true isn’t enough to get it past the firing squad. Don’t include a fact if it needs to be qualified as a thought or belief.

“A lot” is similar to “really” in terms of vagueness. Saying something is “a lot different than it used to be” robs your readers of an experience. While they understand something has changed, they don’t know what it was or how much it’s shifted. They want more specific information to make good decisions and to connect with your writing on a deeper level.

Instead of using these vague phrases, replace them with hard-and-fast statistics. Go for percentages, pounds, solid units of measurement. Those quantifiable terms perform better than the old standby “a lot.”

These two aren’t flabby, but they are seldom true. If you say, “Marketers never consider their clients,” you’re horribly off base. Applying an all-inclusive adjective paints with too broad a brush and is reckless. Instead, opt for “few” or “rare” if you need to quantify but don’t have the numbers. The same thing applies to “always.” Instead, opt for words like “most” or “many.”

The only time “just” has a place in your content is when you’re talking about something being “fair.” For example, “The trial was just.” Uses of “just” to imply something small or inefficient (e.g., “She just couldn’t do it.”) don’t add anything to the sentence. In most cases, you can remove the word “just” without affecting the sentence’s meaning.

“Then” makes your writing stammer, which is the opposite of what you want. To smooth your text, remove the word “then” whenever the sentence makes sense without it. And don’t start sentences with “then” because it makes them clunky and difficult to read.

People frequently misuse the word “literally.” It means exactly. Whether used correctly or incorrectly, the word often is superfluous. Get rid of it or replace it with something more descriptive and precise.

Virtually means nearly or almost, or by means of virtual reality technique. In most cases, the sentence makes sense without this flabby addition. Unless you’re talking about someone who works remotely, “virtually” has no place in your writing.

“So” is another word that doesn’t do much. Despite this, many people use it, particularly as a transition or explanatory word. Delete it without affecting the sentence’s meaning.

“Got” is a lazy word because it doesn’t tell people much about how or why someone got something. Instead, use words that add power such as “obtained” and “earned.”

“Often” teases readers by telling them that something happens frequently without being clear. Replace “often” with specific descriptions such as “five times a week” or “every year.”

Perhaps the laziest descriptive word of all, “very” can be deleted in any sentence without taking away the intended meaning. Where you might use “very” plus an adjective, replace the combination with a single, stronger adjective. For example, instead of saying “very beautiful,” use “gorgeous.” Instead of “very intelligent,” say “brilliant.”

“Very” can be deleted in any sentence without taking away meaning, says @JuliaEMcCoy. #writingtips Click To Tweet

17. The fact of the matter, as a matter of fact

“The fact of the matter” can be deleted in any context, as well as the phrase “as a matter of fact.” Both emphasize a point about to be made, but there are more creative ways to do that.

“The thing is” is another unnecessary phrase you can eliminate without harming the meaning of your sentences. If anything, “the thing is” weakens your sentences because it sounds and looks strange and can be grammatically incorrect: “The thing is is I never got the memo.”

In many cases, you can leave out the word “absolutely” because it’s redundant. For example, “The conclusion she reached was absolutely final.” Final IS final – it can’t go further. Or, “You have absolutely no reason not to try.” Last time I checked, “no” is absolute. It doesn’t need a useless adverb to make it stronger. Consensus: Ditch “absolutely.”

Want to know the laziest way to change the subject? Use “anyway” as an introductory word. Get rid of it and work on making your transitions sentence to sentence and paragraph to paragraph flow better.

“It was a sunny day.” “There was no good reason for the mistake.” “Here we have a beautiful rose.” While these sentences look fine, the convention of combining “it,” “here,” or “there” with a to-be verb like “is” or “was” in a sentence is called an expletive construction. This phrasing adds no meaning and makes sentences unnecessarily longer. For instance, let’s rewrite the above sentences so they’re tighter:

“The day was sunny.” “The mistake was avoidable.” “This rose is beautiful.”

These filler phrases make your writing sound uncertain. Something either is or isn’t. If you say, “Her behavior was kind of rude,” what do you mean? Is there a scale of rude behavior? Did she score a five out of 10? Say what you mean without hedging: “Her behavior was rude.”

A common, fluffy way to write about an object is to refer to it as a “thing.” For example, “A lily is a thing of beauty,” or “Feeling embarrassed is a thing we can all relate to.”

“Thing” is a nondescript, non-committal word that takes away from the strength of a sentence. Find another word descriptive of your subject or remove “thing,” e.g., “We can all relate to feeling embarrassed.” “Lilies are graceful blooms.”

If the point you’re making is obvious or indubitable, then why do you use one of those words? You don’t.

This sneaky phrase creeps into even the most skilled writer’s sentences. It’s not incorrect, but you can use fewer words. For example, “When it comes to ice cream, strawberry is my favorite” can be shortened to “Strawberry ice cream is my favorite.”

To improve your writing, aim to cut or replace words that act as filler. They add nothing.

The best way to weed them? Edit without mercy. As you read each word or sentence, consider whether it adds to the meaning. If not, get rid of it.

As you get rid of the fluff, you can build up the muscles in your content:

When you write in a way that’s easier for people to understand, your content is likely to attract more readers. It’s a surefire way to achieve greater results for your content marketing.

Optimizing Your B2B Marketing Strategy Around the Trust Funnel

How to Build a Thought Leadership Program in 5 Steps